Alaniz Featured on Moz: The Coming Integration of PR and SEO

This article was originally published on Moz.

Earlier this year, I published a Moz post that aimed to introduce the basic principles of public relations that SEOs and digital marketers, I argued, need to know. (Specifically, the post was on media relations and story-pitching as a means of getting coverage and “earning” good links.)

Following the positive response to the post, Moz invited me to host a recent Mozinar on the integration of PR and SEO. ( You can listen to it and download the slides here for free!) As a former print journalist who later became a digital marketer, I love to discuss this niche because I am very passionate about the topic.

In summary, the Mozinar discussed:

At the end of the Mozinar, the community had some intriguing and insightful questions (no surprise there!), and Moz invited me to write a follow-up post to provide more answers and discuss the relationship between SEO and PR further.

Follow-ups to the PR Mozinar

Before I address the questions and ideas at the end of the Mozinar, I just wanted to give some more credit where the credit is certainly due.

People like me, who write for major publications or speak at large conferences, get a lot of attention. But, truth is, we are always helped immensely by so many of our talented colleagues behind the scenes. Since the beginning of my digital marketing career, I have known about SEO, but I have learned more about public relations from observing (albeit from a distance) The Cline Group’s front line PR team in Philadelphia over the years.

So, I just wanted to thank (in alphabetical order) Kim Cox, Gabrielle Dratch, Caitlin Driscoll, Max Marine, and Ariel Shore as well as our senior PR executives Bill Robinson and DeeDee Rudensteinand CEO Josh Cline. What I hope the Moz community learned from the Mozinar is what I have learned from them.

Now, onto the three Mozinar Q&A questions that had been left unanswered.

I do not want to focus on why The Cline Group specifically uses Cision. I would not want my agency (and indirectly Moz) to be seen as endorsing one type of PR software over another. What I can do is encourage people to read these writings from  RMP Media Analysis, LinkedIn, Alaniz Marketing and Ombud, then do further research into which platform may work best for them and their specific companies and needs.

(Cision and Vocus recently agreed to merge, with the combined company continuing under the Cision brand.)

I’ve anonymized and uploaded three successful client pitches to our website. You can download them here: a mobile-advertising network, a high-end vaporizer for the ingestion of medicinal herbsand a mobile app that helps to protect personal privacy. As you will see, these pitches incorporated the various tactics that I had detailed in the Mozinar.

Important caveat: Do not fall into the trap of relying too much on templates. Every reporter and every outlet you pitch will be different. The ideas in these examples of pitches may help, but please do not use them verbatim.

Some commonly mentioned tools are My Blog U, ProfNet, BuzzStream and My Local Reporter. Raven Tools also has a good-sized list. But I can only vouch for My Blog U because it’s the only one I have used personally. It’s also important to note that using a PR tool is not a magic bullet. You have to know how to use it in the context of the overall public relations process. Creating a media list is just one part of the puzzle.

An infographic of integration

And now, the promised infographic!

I told the Mozinar audience we would provide a detailed infographic as a quick guide to the step-by-step process of PR and SEO integration. Well, here it is:

A second credit to my awesome colleague Thomas Kerr, who designs most of The Cline Group’s presentations and graphics while also being our social media and overall digital wizard.

Just a few notes on the infographic:

First, I have segmented the two pillars by “PR and Traditional Marketing” and “SEO & Digital Marketing.” I hate to sound stereotypical, but the use of this differentiation was the easiest way to explain the integration process. The “PR” side deals with people and content (e.g., messaging, media relations, and materials, etc.), while the “SEO” side focuses on things (e.g., online data, analytics, and research, etc.). See the end of this post for an important prediction.

Second, I have put social media on the online side because that is where the practice seems to sit in most companies and agencies. However, social media is really just a set of PR and communications channels, so it will likely increasingly move to the “traditional marketing” side of things. Again, see the end.

Third, there is a CMO / VP of Marketing / Project Leader (based on the structure of a company and whether the context is an agency or an in-house department) column between SEO and PR. This position should be a person with enough experience in both disciplines to mediate between the two as well as make judgment calls and final decisions in the case of conflicts. “SEO,” for example, may want to use certain keyword-based language in messaging in an attempt to rank highly for certain search terms. “PR” might want to use different terms that may resonate more with media outlets and the public. Someone will need to make a decision.

Fourth, it is important to understand that companies with numerous brands, products or services, and/or a diverse set of target audiences will need to take additional steps:

The marketing work for each brand, product, or service will need its own specific goal and KPI(s) in step one. Separate audience research and persona development will need to be performed for each distinct audience in step two. So, for a larger company, such as the one described above, parts of steps 3-8 below will often need to be done, say, six times, once for each audience of each product.

However, the complexity does not end there.

Online and offline is the same thing 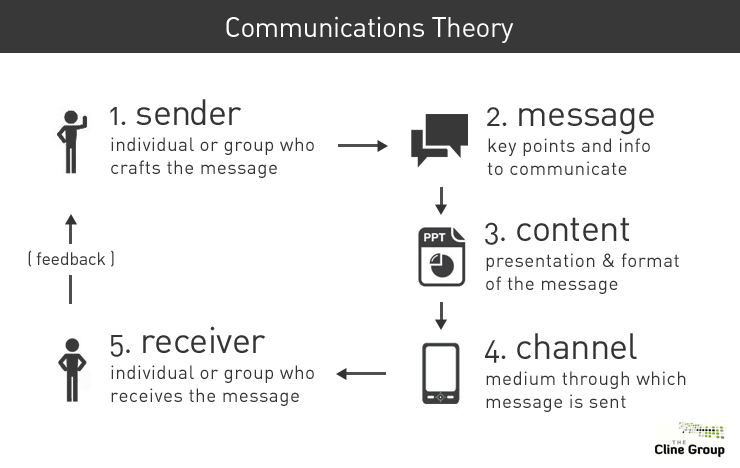 Essentially, as more and more human activity occurs online, we are rapidly approaching a point where the offline and online worlds are merging into the same space. “Traditional” and “online” marketing are all collectively becoming simply “marketing.”

Above is our modern version of traditional communications and marketing theory. A sender decides upon a message; the message is packaged into a piece of content; the content is transmitted via a desired channel; and the channel delivers the content to the receiver. Marketing is essentially sending a message that is packaged into a piece of content to a receiver via a channel. The rest is just details.

As Google becomes smarter and smarter, marketers will need to stop thinking only about SEO and think more like, well, marketers. Mad Men’s Don Draper, the subject of the meme at the top of the page, would best the performance of any link builder today because he understood how to gain mass publicity and coverage, both of which have always been more important than just building links here and there. The best and greatest numbers of links come naturally as a result of good marketing and not as a result of any direct linkbuilding. In the 2014 Linkbuilding Survey published on Moz, most of the (good) tactics that were described in the post – such as “content plus outreach” – are PR by another name.

At SMX West 2014 (where I gave a talk on SEO and PR strategy), Rand Fishkin took to the main stage to discuss what the future holds for SEO. Starting at 6:30 in the video above, he argued that there will soon be a bias towards brands in organic search. (For an extensive discussion of this issue, I’ll refer you to Bryson Meunier’s essay at Search Engine Land.) I agree that it will soon become crucial to use PR, advertisingand publicity to build a brand, but that action is something the Don Drapers of the world had already known to do long before the Internet had ever existed.

But things are changing

The process that I have outlined above is a little vague on purpose. The lines between SEO and PR are increasingly blurring as online and offline marketing becomes more and more integrated. For example, take this very post: is it me doing SEO or PR for our agency (while first and foremost aiming to help the readers)? The answer: Yes.

In a Moz post by Jason Acidre on SEO and brand building, I commented with the following:

Say, 10 years ago, “SEOs” were focused on techie things: keyword research, sitemaps, site hierarchy, site speed, backlinks, and a lot more. Then, as Google became smarter and the industry become more and more mature, “SEOs” woke up one day and realized that online marketers need to think, you know, like marketers. Now, I get the sense that digital marketers are trying to learn all about traditional marketing as much as possible because, in the end, all marketing is about people — not machines and algorithms. What the f&*# is a positioning statement? What is a pitch? I just wish “SEOs” had done this from the beginning.

Of course, the same thing has been occurring in the inverse in the traditional marketing world. Traditional marketers have usually focused on these types of things: messaging documents, media lists, promotional campaigns, the 4 Ps, and SWOT analyses. Then, as more human activity moved to the Internet, they also woke up one day and saw an anarchic set of communications channels that operate under different sets of rules. Now, on the other end, I get the sense that traditional marketers are trying to learn as much as possible about SEO and digital marketing.  What the f&^% is a rel=canonical tag? What is Google+ authorship? I just wish traditional marketers had done this from the start.

In fact, such a separation between SEO and PR is quickly dying. Here is a simplified version of the marketing and communications process I outlined at the beginning:

Traditional marketers and communications professionals have used this process for decades, and almost everything that (the umbrella term of) SEO does can fit into one of these boxes. A message can appear in a newspaper article or in a blog post. Content can be a sales brochure or an e-book. A channel can be the television or Facebook. A lot of  technical and on-page SEO is simply good web development. The most-effective type of off-page SEO is just PR and publicity. Public-relations executives, as I have written elsewhere, can also learn to use analytics as yet another way to gauge results.

It all goes back to this tweet from Rand, which I cite in nearly every offline conversation with the marketing community:

SEO as an entity (sorry for the pun) unto itself is quickly dying. The more SEO entails, the more the umbrella term becomes useless in any meaningful context. For this reason, it is crucial that digital marketers learn as much as possible about traditional marketing and PR.

So, in the end, how does one integrate public relations and SEO? By simply doing good marketing.

Want more? Don’t forget to watch the Mozinar — I’d love to get your feedback in the comments below!

A former journalist, newspaper editor, and director of marketing and communications in the high-tech industry, Samuel Scott is now a global marketing speaker and writer of the regular “The Promotion Fix” column in The Drum in which he discusses integrated traditional and digital marketing. Follow him on Twitter and Facebook. Alaniz Covered in Fit Small Business: Top 23 Benefits of CRM Software From The Pros in 2019 How to Find a Great SEO Company